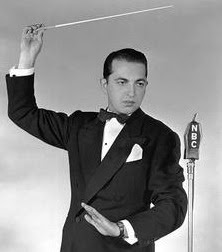 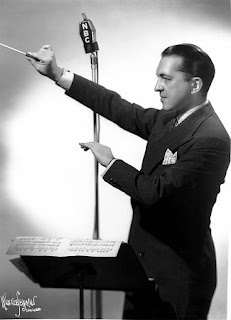 Faith was born and raised in Toronto, Ontario, Canada. He was the oldest of eight children. He played violin and piano as a child, and played in theatres and at Massey Hall. After his hands were badly burned in a fire, he turned to conducting, and his live orchestras utilized the new medium of radio broadcasting. Beginning with defunct stations CKNC and CKCL, Faith was a staple of the Canadian Broadcasting Corporation's live-music broadcasting from 1933 to 1940, when he resettled in Chicago. In 1945, he became a naturalized citizen of the United States. He made many recordings for Voice of America. After working briefly for Decca Records, he worked for Mitch Miller at Columbia Records, where he turned out dozens of albums and provided arrangements for many of the pop singers of the 1950s, including Tony Bennett, Doris Day, Johnny Mathis (for Johnny's 1958 Christmas album entitled "Merry Christmas Johnny Mathis"), and Guy Mitchell (for whom Faith wrote Mitchell's number one single, "My Heart Cries for You"). 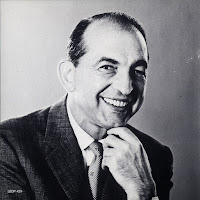 Martin Block interviews famous easy listening music conductor Percy Faith on the National Guard public service transcription. But first we hear a "Summer Montage" with Faith's recordings of The Theme From A Summer Place, Summer Breeze and Summer of '42. 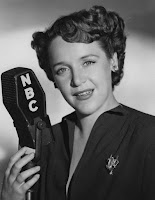 Eleanor Steber (July 17, 1914 – October 3, 1990) was an American operatic soprano. Steber is noted as one of the first major opera stars to have achieved the highest success with training and a career based in the United States. Here on this audio broadcast of May 21, 1944 she was a guest on the Andre Kostelanetz show...conducted that week by Percy Faith.

ALAN BUNTING's website http://pelstream.co.uk is the ultimate Faith resource with a complete discography (something you won't find here!) and much more for the collector.  Alan has a tremendous discography complete with cover art and the various catalog numbers applied over the decades.
I have never been real bright on inclusion of links because I'm lazy or incompetent, but one link has never been shown here and it always should have been...
http://www.duttonvocalion.com/
There are wonderful recordings from London/Decca  that we have all loved - Ronnie Aldrich and his "twin pianos" (well, not really twin pianos but some good twin-tracking and pan-potting), Stanley Black, Frank Chacksfield, etc...  Many of the recordings have been perfectly remastered and reissued through Michael Dutton's website and it is must reading for mood musikians.  Here you will find the great London Phase 4 records.  Please check out your favorite artists from London Records (Decca in the UK) here!
Here you will find a LOT of great music in a wide range of interests and going waaay back in time.  Well worth a visit... please stop by!  Robert Farnon records, even (gasp) Mantovani... there's a lot of great music here.
The ROBERT FARNON Society web page  -  Visit http://www.rfsoc.freeserve.co.uk to read about/join the Society, that has done a magnificent job of maintaining, through the years, a keen  interest in "our" type of music.
RAY CONNIFF    The late Ray Conniff has two tremendous websites and publications, click here and below for details!
Doug Mitchell's site:  http://www.rayconniff.info/
Manfred Thonicke's RAY CONNIFF web page: http://www.thoenicke.homepage.t-online.de/rayconniff/index.htm
CD's of vintage music  www.deltamusic.co.uk
THE JOY BOYS: Washington DC's long-running, perfect example of how great live radio could be - and now Robert Bybee has a website devoted to their on-air antics.    There's been nothing on the air for us "geezers" for a long time.  Some people had their tapes rolling, and on the Joy Boys site, you'll hear some clips of "live radio" gems.  By all means please drop by http://www.thejoyboys.com and enjoy some sounds of two of the most talented gentlemen of the airwaves.
Speaking of Washington, DC, I was born there, though my first trip home at two weeks of age was to the Maryland suburbs of DC.  Through the web I can relive the local and national television shows that served as light education and a lot of just plain fascination as a kid - heck, gosh, gee, everyone remembers Bozo The Clown, right?  Can you say WILLARD SCOTT???  Many of the shows and themes depicted here are local to the Washington area.  What's very interesting relating to music, is that we've found that a couple of the tremendously popular shows used Percy Faith themes (Countdown Carnival used "Little Bells and Big Bells" - Captain Tugg used Faith's arrangement of "Bluebell" - and we just found out that Mitch Miller did the music for the "Ranger Hal" program.  Visit Bob Bell's site and see the shows we watched as brats I mean perfect children in the 50's and 60's!!!  http://kidshow.dcmemories.com/.  Bob's site will bring back childhood memories of the television shows that some of our group of "aging boomers" grew up on - with a special emphasis, of course, on those shows from the Washington, DC television stations aimed at the kiddies
No comments:

These pictures were taken March 23, 1974 at the WMAL radio studios on Jennifer Street in Washington, DC, the day before a concert with Percy Faith as guest conductor of the USAF Concert Band with the Singing Sergeants at DAR Constitution Hall the following day (Sunday, March 24, 1974).
Here are some "nostalgic" photos/reviews taken from a 1955 concert tour Percy did with Tony Bennett.  Sadly, the very page with the most Percy Faith information, and his picture, was torn out, but it's still very interesting!
Rather too shy to write to Percy Faith I initially composed a letter (didn't keep a copy) to Irving Townsend, who was responsible for the late 60's heavy pop-flavored albums that featured the female chorus (who can ever forget "Candy Man" but I digress...) here is Faith's response!
No comments:

Johnny Douglas and The Living Strings

Dick O'Connor discusses the discontinuation of The Living Strings (and associated Living Things) on Camden, written in 1983 when it happened;  a fascinating and informative look back in time.  File is in .pdf format.  Click here to read.
The Living Strings Discography has been totally revised and completed by VINCE PARADA (click this link)
Johnny Douglas Biography © Norma Camby, last amendment 2009  Permission Granted for use on this Web Site
Johnny Douglas Tribute

˜ ˜ ˜ ˜
with
JOHNNY DOUGLAS
and his
ORCHESTRA and SINGERS
Three albums from the RCA Living Strings series
"The Spirit of Christmas", "White Christmas" and "A Christmas Songbook".
This 2 CD set comprises of 32 tracks of well known Christmas songs, carols and medleys.
Disc 1 is an instrumental, featuring the lush, rich sound of the velvety strings and Disc 2 with voices, warmly blended as instruments of the orchestra.
To listen to samples of some tracks please visit our website: www.dulcimarecords.com
On compact disc only – DLCD 122
UK customers £12.75 plus £2.00 p&p
Overseas customers $30.00 incl. shipping.
Available from most record shops, our website, or by mail order.
DULCIMA RECORDS
39 Tadorne Road, Tadworth, Surrey KT20 5TF, UK
TEL/FAX: 01737 812922
Email: info@dulcimarecords.com
Distributed by AVID and SAVOY MUSIC
DULCIMA RECORDS

WHERE DID THE NIGHT GO

from
The Living Strings Series

Distributed by AVID/BMG and SAVOY MUSIC

Two albums from the RCA Living Strings series
“No, No, Nanette” and “On Broadway”.
With his foot-tapping arrangements of these Broadway melodies, Johnny Douglas makes a full orchestra sound like a dance band.  He creates a show-music sound, captures the excitement of the choreography and the loveliness of the love songs.
To listen to samples of some tracks please visit our website:
www.dulcimarecords.com
On compact disc only – DLCD 123
UK customers £12.99 plus £2.00 p&p

Distributed by AVID and SAVOY MUSIC

Percy Faith?  Japan?  Starting in 1966, Percy began concert tours of about a month's duration, around 20 cities, throughout Japan, where people loved to hear his renditions of popular music, including Gershwin and showtunes.  The Japanese audiences love his music and through all these years, Percy's original manuscripts brought his arrangements to life in Japanese concert halls, to listeners young, old, and in-between.  Too bad it can't happen in the "corporate" environment of the United States...  In the spring of 1976, just a few months after his death, the concert that sadly became a "tribute to Percy Faith" was conducted by DAVID ROSE.  Then for many years, Alan Broadbent took the baton, followed in the 90's by the late Nick Perito.  Orchestra manager Terry Woodson, conductor for Frank Sinatra, Jr., now conducts the live sounds of Percy Faith arrangements via tours of several Japanese cities every few years.  I plan to post one or two of these concerts as recorded by Marilyn on her Sony Handicam, she was always seated near the back of the concert hall, but the simple-yet-beautiful stages were well captured.

Note that Hattori was released in the midst of the "SQ Quad" frenzy and unlike some of Faith's domestically released albums, sounds excellent on the SQ album.  Taragon, however, chose to use what must have been the two-channel mix for the CD reissue now available; the mix is very different and rather diffuse and "in my opinion" not better than the Lp (the opposite from my impressions of other Faith SQ releases where the albums sounded terrible with very isolated tracks and exagerrated out-of-phase material used to "drive" the sound to the back speakers, especially if you had a receiver with "Wavematching Logic" that would steer the apparent sound of all channels to what would be the loudest.  Put another way, the SQ releases of Faith's albums, e.g., "Clair" - sound lousy.  The standard stereo mixes are fine, though it is my understanding that "Clair" and all albums after that were recorded using 8-tracks, mixed down and customary reverb added for 2-channel stereo.  I was also told that Percy Faith was most likely the very last "holdout" who didn't want "multitrack" recordings. 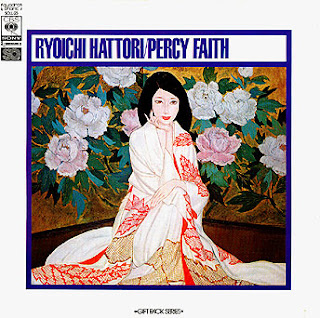 "It was just after the War when I heard the name of Percy Faith for the first time.  I had been attracted by the music of Kostelanetz with its flavor of symphonic jazz before I heard Percy Faith, and when I received the record of my melodies made by Percy Faith, I was so excited that I felt as though I was a child.  As I enjoyed the Koga Melodies Lp, I had looked forward to hearing the Percy Faith arrangements of my melodies.  The arrangements are unique.  I am an arranger myself and I heard his arrangements with critical ears, however, his arrangements, with preludes and interludes which I could never think of, utterly knocked me down.  I felt unavoidable difference in attitude toward music which probably came from cultural difference.  The same can be said if I arranged some American music.  It is very welcome that many Japanese music melodies are played by various musicians abroad and that Japanese melodies are introduced to world music lovers.  I look forward to seeing Percy Faith on his next trip to Japan.  - Ryoichi Hattori"

We are Amazon.com associates

Dedicated to memory of

Percy Faith
Percy Faith (April 7, 1908 – February 9, 1976) was a Canadian-born American bandleader, orchestrator, composer and conductor, known for his lush arrangements of pop and Christmas standards. Though his professional orchestra-leading career began at the height of the swing era, Faith refined and rethought orchestration techniques, including use of large string sections, to soften and fill out the brass-dominated popular music of the 1940s.

Material here generated with permission from the 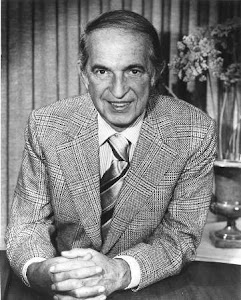 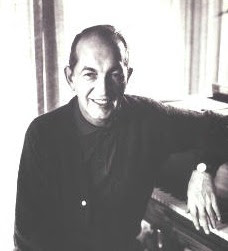 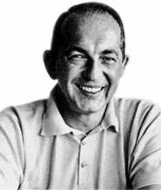 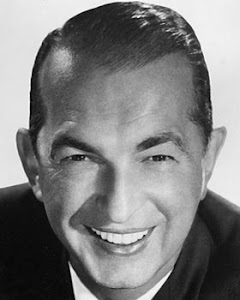 YOU MAY ALSO ENJOY: 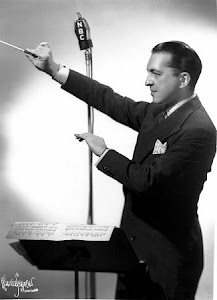